Looking at the title, the director “Dicle Ozcer” had the viewer prepared for a “broken” unfinished tale of one of life’s most precious gifts; parenthood. This smart choice of title puts us on edge as to try and anticipate when it will be “broken”.

The story in itself is not something that hasn’t been treated before, but what makes “broken circle” stand out is how Ozcer embodied it; be it the choice of actors, where both Rons and Quintero excelled in playing the married couple with all its ups and downs leading to the ultimate loss of their long awaited unborn, or to the carefully crafted details of the “mise en scene” that are revealed as we watch the film.

Technically, and in relation to its name the smooth transitions between the scenes give a sense of a one shot work thus transporting the viewer into the emotions of each and every scene. The camera movement proves the craftsmanship of Ozcer’s understanding the true language of film making, propelling the film into a well crafted and beautifully made piece of work. As for lighting, the director smartly went for simple, normal lighting without any distractions in order to keep the main focus on the script and the flow of events that the couple were going thru. The music used serves well its purpose and supports the development of events in a non-tacky manner.

The only downside felt after watching “Broken Circle” is that it could have been a bit longer, in order for us to enjoy more the style of Ozcer, since it really deserves to be seen and applauded.

Talking about the craftsmanship of the director and her care for details, one cannot but notice how the name tag on the house door  appeared empty from the opening scene and was touched by the main female character while she was stepping into the house for the first time as if she was sending out a specific message (unveiled as the film progresses) and that tag remained empty all thru, implying that the same emptiness will prevail and take over when their circle was broken.

On a final note, the film succeeded in portraying both the emotional joy and anticipation of awaiting a newborn and the agony and pain of loosing it. Again as the title says it is a real “broken circle” that nothing can compensate for. 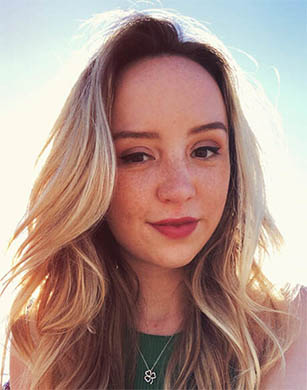 Dicle Ozcer was born and raised in Ankara, Turkey. Throughout her childhood, Dicle had a passion for performing and took part in many school plays, performances and writing competitions. She moved to Los Angeles to follow her dreams of becoming an actress and got her BFA in Acting from AMDA College and Conservatory of Performing Arts in 2016.
​
After graduating, Dicle performed in numerous plays, short films and music videos. She then submitted an original play to The Santa Monica Theatre and made her debut as a director when her play was picked to be performed at the theatre. Dicle’s first play The Jump, a dark comedy about mental health, turned out to be a success and got renewed for a second run. Later on, Dicle got the opportunity to direct more performances at the theatre, Shakespeare’s classic love story Romeo & Juliet was one of them.

Upon discovering her passion for directing, Dicle attended New York Film Academy to learn everything from A-Z about making a movie and got her MFA in Filmmaking in 2019. She has directed four other short films; Cracked (2017), Heart and Soul (2018), Broken Circle (2018) and Happy Faces (2019).

​Dicle’s latest comedy is still running the festival circuit and getting more recognition by day.

Dicle was invited to Newport Harbor High School as a guest speaker for TV & Film Production students to have a screening of Big Break and she recently did an interview with Film Festival Report about her experience with film festivals.