This film is definitely not your classical everyday watch, in which one can sit back and watch as sequential events take place; instead director “Sergio Munoz” brilliantly presented “Holestepper” as a breakthrough in the world of cinema.

The work in itself is a serious attempt in projecting the long time instructor/student relation; a relation in which students think they can out smart the “old fashioned” instructor by making fun of him or bullying him on cyberspace, but at the end of the day it this is not the reality of things.

Watching the award winning main actor “Oswaldo Salas” playing the role of “Angel”, an instructor who has a physical disability is a real pleasure, for not only did he ace the role in a sense that the viewer is emotionally involved with him in each and every step of the work, but also was able to master the “Angel” character as the naive instructor and then when he flipped to the bitter one. The narrative of the film is unique in a sense that it is deceptively simple in the way that the story is unveiled and how all of the events fall correctly into place.

Technically, and from the very first opening scene of the film the viewer is presented with footage taken with a mobile phone, thus raising more than one question (to be answered as the story progresses) about the purpose of such a bold choice and how this will serve the final outcome, as time passes and more mobile phone footage is shown, it becomes clear how mixing footage makes “Holestepper” all the more special and unique. The use of CGI (computer generated imagery) thru out the work also enhances the previously talked about desired effect and is exceptionally smart in its application.

The art direction combined with the choice of costumes and props are all building blocks that aided the film to reach a higher level and distinguish it from the others.

In the end, one cannot but applaud the director “Munoz” for a very well-crafted piece of work be it in his style, choice of actors, narrative or the overall outcome and acknowledge his cinematic maturity in creating his own unique signature style, a style that no doubt will have a bright future and a large audience, propelling the direct into his well-deserved place in the industry. 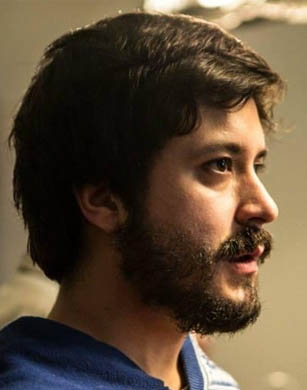 Lima, 1991. Bachelor in Audiovisual Communication from the University of Lima. Since 2014, he is part of the audiovisual group Señor Z, one of the most important production companies in Peru. “Pisahueco”, its opera prima, was winner of the National Short Film Contest of the Ministry of Culture of Peru.