It is never easy working on such a delicate topic such as the mental health of a young teenager; so many things could go wrong during the process that many directors prefer not to tackle such issues, that is not the case with the director “Thibault Marsaudon” who did his homework by skillfully researching the subject and carefully working on combining all the elements (acting, directing, mise en scene…) in order to deliver an ingenious piece of work.

The talent of “Marsaudon” does not stop at directing but also he was able to prove himself as a well-established screenwriter, the script is tightly written and hooks the audience from the very first opening scene.

As for the acting, it is a well deserved hats off for the young actor “ Seamus Davey Fitzpatrick” who excelled in portraying the role of the mentally challenged teenager, a role that even the most experienced of actors would find difficult to play, he was able to give the part much personality making him a main pillar in the success of the work; be it his moments of silence or when he has one of his fits. As for the rest of the cast they did a fine job as supporting roles although more could have been done when it comes to the role of the parents.

Technically, “Marsaudon” mastered the use of the camera language for

the benefit of the storyline and content of the film; the measured pace of editing and slow travelling camera movement reflected semantically the inner-clouded state of mind that is lived by the main character. Again, the use of out of focus stresses the fact that we are living the experience that he “John” is going through. The same goes for the audio part, the heightened sound effect use; such as when a car honks or the basketball is being dribbled, gives an auditory feel of the ongoing occurrences, the music on the other hand is scarce, so the audience can enjoy the silence being lived.

To conclude, “Overcome” is a very moving portrayal of the journey into  the realm of the “other” and a solid proof that being different is not something bad or unacceptable if only people would learn to accept each other as they are. It is a must-see for all the reasons stated above, especially for the skillful talent of writer/director “Marsaudon”, who was able to expertly transport the viewers into this wonderfully crafted journey. 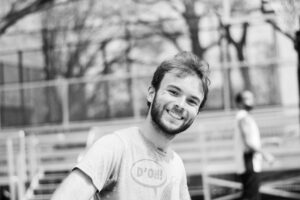 Thibault is a young director born in France and raised in Switzerland. He holds a high school diploma in science with honors. He struggles against ADHD and Asperger’s syndrome and spent one year at the Geneva University to study psychology in order to help him to cope with his condition.
Then he decided to do what is a passion for him and joined the Geneva Cinema Academy to study film making. During the first two years in Switzerland he made 2 shorts, earning a school merit award for the second film.
He made Overcome in New-York for his Bachelor Degree, choosing to share his own experience and vision through cinema, making a force out of his condition.