From it’s opening scene, the crafty use of music laid the grounds for an exciting and thrilling series of events that would prove that “Pauper” is a well crafted and canny piece of work. Early on the thrilling mood set by director “Watson” transports the viewers into each and every scene of the film and makes them a part of the on going actions.

The true talent of “Watson” is not only revealed in his directorial skills (that will be discussed at a later stage) but also in his writing, the smart and plausible way in which the script develops, makes the fictional story of a murderous stuffed animal highly believable.

Actress “Veronica Smith”, fervently performed the main character who at first had the viewers believe that she was mentally ill in the way she behaved and in the fact that she talked to her toys made it all the more certain that there was something wrong with her. She was able to convey the fear experienced by the character to the audience and have them live every moment of suspense and anticipation; a task that is not easy and needs a serious and committed talent to be able to handle such a task.

Technically, the combination between “Watson” as director and his main actress “Smith” as the director of photography was a sure recipe for success, the carful selection of the different types of shots and angles used; from the point of views to the low angle shots made the audience all the more experience the emotional perspective of the character, add to that the editing pace that was nothing more than fitting to relay all the moods desired in every scene. Lighting wise, the use of colors to indicate emotions ( red when danger and fear, yellow when it is safe) was smartly applied and far from being the “cliché” we see in cheesy horror flicks. As for the music, the director skillfully used it to serve its purpose of enhancing the mood and not the creator of the mood as we see in so many films of this genre.

Finally, this short film is a real audience pleaser and again an impressive piece of work by director/producer “ Neil Watson” who seems to understand the true meaning of the language of film and has a lot to give and show the world as he is a really skilled artist. 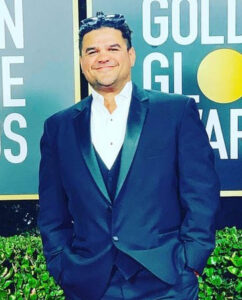 Neil Watson is a Director, Producer, Writer and Director of Photography living in Los Angeles. He was born and raised in the town of Aguadilla on the north west coast of Puerto Rico. At a very young age, Neil was filming surfing and skating videos with his friends, telling stories of his youth in a small town. His grandfather Miguel, was the lightning rod that sparked Neil’s love for cinema early in his youth, until Life and Hardship took over and he had to put aside his passion for filmmaking in order to work and make a living as a bartender and a variety of other jobs. He moved to Florida to make a life for himself. He spent a few years working for Disney World during which time his daughter was born. Her birth opened a new chapter full of stories for him that would continue to this day. After many years of moving around the east coast and working different jobs, Neil found the opportunity to realize his dream as a filmmaker. He attended Full Sail University and shortly after began working as Production Assistant and later Camera Assistant on many spanish tv shows. Georgia was next and there he moved up and worked on many shows as a Camera Operator including Sharknado 3 and American Ninja Warrior. Wanting to tell his own stories, Neil decided to make the move to Los Angeles 4 years ago, where he continues to work as a Local 600 Camera Operator on independent feature films as well as big studio features like James Cameron’s Avatar Sequels. He has written and directed award winning short films and commercials in addition to music videos and is currently writing his first feature film. In 2019 Neil and his partner Veronica Smith set up their production company called Film Dreams Inc. where they produce films, music videos, commercials, sizzle reels, etc. from concept to final product.