In his own words director “David L Knight” describes perfectly his movie by stating that it is a  “supernatural revenge film” . Watching his work, one can easily grasp what he is trying to say; the film is a an emotional roller coaster dealing with the dilemma of whether a grieving father should take revenge for the brutal killing of his daughter or turn in the killer to the police and trust that they will avenge her death.

The cast in general did a good and decent job especially the combination between “Jake Brown” in the role of “Alex” and actor “David Pritchard” in the role of “Richard”, the chemistry between them propelled the film into fulfilling the desired emotional intensity. The main torture scene between them reminds of a combination between of the gore torturing scenes from the hit movie “Hostel” by director “Eli Roth” and the disturbing torturing scene from the masterpiece “Reservoir Dogs” by Quentin Tarantino between actors “Kirk Baltz” and “Michael Masden”.

The script is very well structured, real and intense in a sense that it allows a smooth flow of events, be it the dialogue between the killer and his victim or when the grieving revengeful father is interrogating the killer.

Technically, and from its opening scene the choice of the bluish colors palette reflects the coldness and harshness of what’s to come, this emotional outcome is also reflected in the excessive use of close – ups that in turn are used to show enhanced emotions and intimacy of feelings which is a bold move by director “Knight” and reflects his real understanding of the underpinnings of the world of cinematography. Add to that the symmetry in both handheld and fixed frames transported the viewer into the action and broke the wall between the audience and the action happening. The choice of music for the film was a real triumph; the use of musical instruments such as the base and the violin brings to mind the famous sound track of “Requiem for a dream” directed by “Darren Aronofsky”, the use of such instruments is again to be applauded  for it is not an easy task to have such an outcome when they are used.

Finally, “Rachel” is a serious and artistic piece of work that deserves to be watched with great attention and care to the well crafted details by director “David L Knight”. 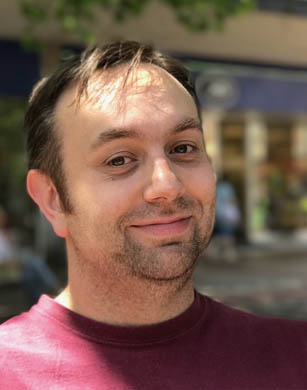 David Knight started his journey to be a filmmaker at the age of 21 when he walked away from a bar management career of 3 years to start a new career within the film and television industry. Having only an ambition and a love of films he enrolled at Solihull College on a Media and Production Course. After the first 6 months his first short film Rendezvous, was handpicked to be part of the official selection of the 2004 Stourbridge film festival where it received favourable reviews.

He completed his course at Solihull College and received a HND with distinction, then moved onto the University of Gloucestershire to study a degree in Video Production. In his final year, he wrote and directed two short films. The first, 2’s Company a romantic comedy, was part of the official selection at the Viewfinder Film Festival in 2006 and received excellent reviews from the festivals patrons. After working on a separate project as editor to hone his skills, he then went on to make his final film Hit or Miss a dark drama, which won him the Screen Writers Festival Award for Best Writer / Director 2007.

After Completing university, David directed numerous projects which include music videos and a series of internet viral’s chronicling the making of 2008 digishorts film Spirited. David then decided to then focus on writing while building his industry experience as a 1st A.D and a freelance editor.

In 2018 David returned to directing with his powerful short film Suicide Blonde. Which received five nominations and win 2 awards including “Best Local Film” at the 2018 Birmingham Film Festival.