While watching “S+M”, one cannot but acknowledge the keen artistic eye of writer/director “Simone Esposito” and his talent, especially at such a young age and this film being his first professional experience combining both the writing and directing, to be able to come up with such results “Esposito” is well on his way into mastering the art of film language and having a successful career.

Inspired by a true story, the development of the screenplay was able to

convey the intense mix of emotions and transport the viewer into the characters lives in each and every scene be it a joyful one or a gloomy one, but the story as a whole could have been developed a bit more, in a sense that the spectators would get the opportunity to really delve into the lives of each and every character, in turn the actors did a fairly successful job and the performance of most of them was more than convincing.

Technically, and from its opening scene the director proved the understanding of the effect of correct camera movement and used this

knowledge to the benefit of the work, as for the shifting between extreme wide shots to medium and close up shots, he was able to create both a sense of alienation and a sense of intimacy when needed and as each and every situation dictates, the color pallet chosen enhanced the desired overall mood especially in both the walking in nature scene and the bus scene.

The choice of music could have been different and more unique, as it didn’t really fulfill the required effect and was rather an alienating factor, add to that the lack of ambient sounds that would rather seem

necessary for such a work. The editing in general was cleverly used to

strengthen the overall result, except the use of the black and white effect which seemed to be a bit out of context since no pattern was created for it and could have been an intriguing plus if manipulated in a proper manner since it generates inquisitiveness and curiosity within the viewer.

Finally, “S+M” is more than an achievement for the young writer/director “Esposito” who (and as mentioned earlier in the review) has the potential to reach very high levels of success if he manages to gain the required experience and know-how of what it takes to make it in the world of film making. 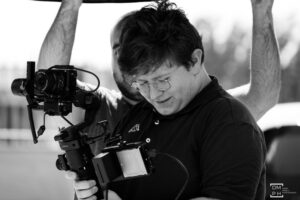 Simone Esposito was born on August 8, 2006 in Naples. In 2017 he participated in training sessions at “Slim Dogs Production”, in 2019 he attended a course in Direction of Photography at the “Napoli Film Academy”, a Workshop on the use of the Steadycam of “Matteo Cinque” and a Photography Direction Workshop with “Francesca Amitrano”. In 2020 he attended a directing course at the “Napoli Film Academy”