The Invitation by Thorsten Schade

“A breath of fresh air”, is exactly what describes this piece of work, be it the twist in the developing plot, the cast or the well crafted technical aspect, it is all a real enjoyment. Writer/Director “Thorsten Schade” clearly demonstrates the skills of an experienced and promising filmmaker; mastering the “horror” genre he knew how to break the cheesiness and cliché that a lot fall into when tackling such work.

The animation opening of the “Invitation” reminds us of another German masterpiece “Run Lola Run” by writer/director “Tom Tykwer”, where we have someone running aimlessly, not knowing if they are running from something or towards it.

The script is skillfully multi-layered in a sense that the viewer is always on edge and has barely the time to breath while watching the different events unfold in front of him. The synergy between the actors demonstrates great coaching and actor directing skills from director “Schade”, who was able to get the best out of an almost flawless cast and proved that there is no such thing as a major role and a minor one but all roles are equally important and must be given full attention, which was  not only was an added value but a corner stone in the success of the work.

Technically, the movie is cut into two halves; as if we are watching two movies in one, the first having a slow pace editing with high key lighting and a unvarying “mise en scene”, and a second half where everything changes and we go into “horror” mode, with faster editing, low key light, a gloomy overall look and an startling “mise en scene”, with a perfectly crafted scene (the torture/killing attempt of Tom Renner) which reminds us of the horror/gore scenes from the hit film “Hostel” by director “Eli Roth”. As for the music, it served its purpose in a very subtle manner being not overly abused but rather enhancing the desired mood of each and every scene it is used in.

Finally, this production is not only a must see skillful piece of filmmaking and “a breath of fresh air” as mentioned earlier, but also marks a turning point in the directorial/writing life of  “Thorsten Schade” as he was able to prove himself as a master of his craft and someone who we will definitely be on the look for in anticipation for any future work. 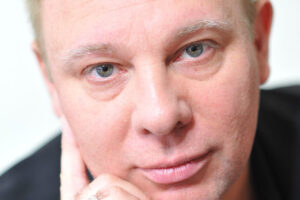