Happiness Is Here And Now by Georgia Doan

In her documentary, “Happiness here and after” the director “Georgia Doan” deals with the struggle of finding happiness thru the eyes of two characters that take up the Buddhist monastic life experience. Watching the work a sense that time has slowed down takes over and we are taken on a spiritual journey that is full of serenity and tranquility, all of which is

owed to the skillful talent and vision of “Doan” in knitting each detail together, a talent that brings to mind the famous Documentary film maker “Raymond Depardon” and his ability to view humans with real compassion.

Technically, the director succeeded in establishing her own signature; be it with the her subtle style of shooting by using a mixture of close ups and wide shots thus enhancing the serenity of the work or her refined discontinuity style of editing which allowed the viewer a breathing space to reflect on their own search of the meaning of happiness, the overall slow pace of the work reflected the relaxing mood desired. The natural lighting used shows a great deal of professionalism from the director in terms of being able to truly understand the essence of the language of film. Several instances in the documentary reminds us of great masterpieces such as Baraka ( the scene where the bell is ringing and the accompanying mood). As for the music used, working on a score for such a film is not at all an easy task, but again the choice is to be applauded because it served extremely well its purpose in conveying the desired effect.

As a conclusion and as the tag line of the film states: “though they could find happiness, but it’s not there. It’s here.” This documentary proves that thinking outside of the box is always needed when dealing with such topics, and the ability to stand out with such a piece of work is again evidence that such ideas are to be hailed and their respective creators such as director “Georgia Doan” are to be acknowledged for their creativity. This documentary is a must see, since it gives the viewer a breath of fresh air in our “polluted” world. 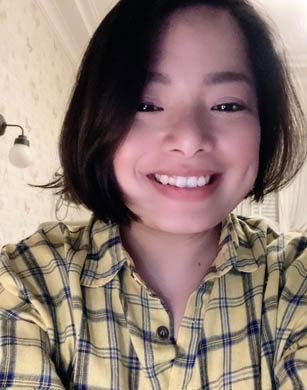 Georgia Doan grew up in Saigon, Vietnam and moved to Sydney, Australia in 2002. In 2012, she decided to become a filmmaker and attend university to study film. During her time as a film student, Georgia was very active in finding her own style and network by participating in different university exchange programs and film projects in different countries such as Australia, the UK and Germany.
Upon graduation, Georgia returned to Australia to direct and produce the poetic documentary Happiness Is Here And Now, which is to be her directorial debut.
Georgia is now submitting Happiness Is Here And Now to different film festivals in Australia and internationally.
In 2019, the film obtained Runner-Up status in the Movies and Animation category in the A’Design Award & Competition. This is the second-largest design award in the world, and is held annually in Como, Italy.
Georgia is especially passionate about the creative process and artistic aspect of every film project that she has worked on.
Georgia is also a musician, which helps her be more creative in her sound design and in integrating music into her films. Her main career goal is to direct a feature artistic film for a major production company.