Being able to observe the growing film maturity which writer/director “ Guy Nicholls” is going through is a real enjoyment; having had the chance to review one of his former works “ An eye for an artisan” it is really obvious how he has quickly developed as both writer and director in so many ways that makes the viewers really anxious about what is next.

The way the script is smoothly interweaved between the past and present shows a real craftsmanship by “Nicholls”, add to that the crucial portraying of such a mental case and how it is manifested reflects proper research and understanding from the writer and proves that he went the extra mile in delving into the psychological world in order to truthfully build the characters. As for the acting, it seems that the formula used in his previous film “ An eye for an artisan” (which proved to be a success), was able once again to enchant us viewers into each of the actors role, especially the synergy between (Heaven and Widdows) that was more than memorable and proved that film is all about team work as they achieved the required harmony that gave the work a very unique taste.

The technical aspect of the film is a real corner stone in “Nicholls” career as it is here where his understanding of the true language of film and his ability to manipulate the elements of cinematography created the more than well-crafted work. From its opening sequence, the use of fast cutting between different close ups and extreme close ups was more than a hook to early on grab the full attention of the audience to what was more than a pleasurable ride. The mood board shifts between the past and present enhanced each and every scene and gave credibility to the overall work. The editing is to be commended, as it is not an easy task to be able to have such a command of a pace that is able to keep the viewers on edge and at the same time deliver the message intended. The soundtracks used provided an atmosphere of realism and believability to what was being displayed, thus it became an added value.

In the end, this is a film with a ton of visual information packed into it, and every element reflects the vision of a director who is definitely on his way to much greater achievements; knowing that nothing in a film is random, every element in each frame carries meaning. 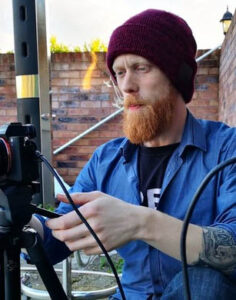 ‘An Eye for an Artisan’ is the third short story Guy has written and directed, following ‘Kissed Crowns’ in 2017, and ‘Couple of the Decade’ in 2018.