The Inverted woman by Santi Planet

From it’s title, the film has the viewers set for a unique film experience that would bedazzle their minds and have them overwhelmed with a mixture of infused emotions rarely caused by watching any film.

The innovative idea of the film by itself is a real sensation and a solid proof of creativity and craftsmanship by writer/director “Santi Planet”, who clearly understands the art of film making which is a process that usually takes years (if not a life time) to grasp.

It is always a challenge to be able to turn a certain idea into a good script, and the screenplay of “The Inverted Woman” is more than just “good”, the flow of ideas and events are so cleverly knit together that the audience looses the sense of time and is sucked in to each and every detail as the story progresses.

The acting in this film is to be highly commended, especially the exceptional performance by “Rosa Maria Diaz” as “Ana” a complex and multi layered character; through her genuine facial expressions and ingenuous body language she was able to ace her part and become one of the main reasons the film is a hit.

Technically, this is a perfect example of how the synergy between all the elements involved creates an award-winning outcome; be it lighting, camera movement, framing, editing and all the other components are crafted with great precision and accuracy. The one source lighting (as if in a real theater) enhances the mysterious and enigmatic overall mood of the work and fuses the sensation of what is real and what is fiction to create a new world in which both are equal and lived as one, the carefully selected frames, angles and camera movement reveal the character’s feelings and makes the different situations along the whole film more intense and intimate, editing wise the pace in which we move from reality to fiction adds to the complex and dazzling development of the plot. As for the use of music and sound effects it was a real accomplishment especially the choice of the soft piano played early on and through out different scenes in the film that added to the tension and the eerie mood desired.

Finally, and as the main actress “Diaz” says in the last scene: “ the perfect symmetry”, this is exactly what this film is a “perfect symmetry” between all of its elements and a truly great piece of filmmaking not to be missed. 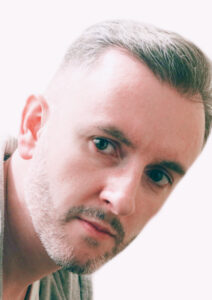 Santi Planet is a Spanish filmmaker born in Barcelona (1979). He also has a PhD in Information and Communication Technologies.

His love of cinema made him dream of directing films since he was a child. With a creative spirit and self-taught mentality, he became fond of the writing of short stories and the techniques of film photography, starting in the world of cinema with a Super8 camera and making VHS recordings. Already in the digital age, he has authored several short films for express festivals –such as the MetropoLHis Festival (“Lo que él soñaba”, 2011), the International Festival of Catalan Cinema (“Designi”, 2012), and the BCN Visual Sound (“Recuerdos”, 2013).

His most recent works include “Relaciones globales” (2013), screened in competitions such as the Valladolid International Film Week (SEMINCI) or the Gijón International Film Festival (FICXIXON), and winner of the Audience Award for best short film at the VIII MetropoLHis Festival; and “Eclipse” (2016), winner of several national and international awards –including the best short film– and more than 40 selections at festivals around the world, with screenings in more than 15 countries. He has also made audiovisual collaborations for theatrical works such as the adaptation of “Hendaya, cuando Adolfo encontró a Paco” (2017), by Pepe Macías and Carla Guimaraes, and “Veganos, el musical” (2019), by Estanis Aboal and Jesús Horcajo.